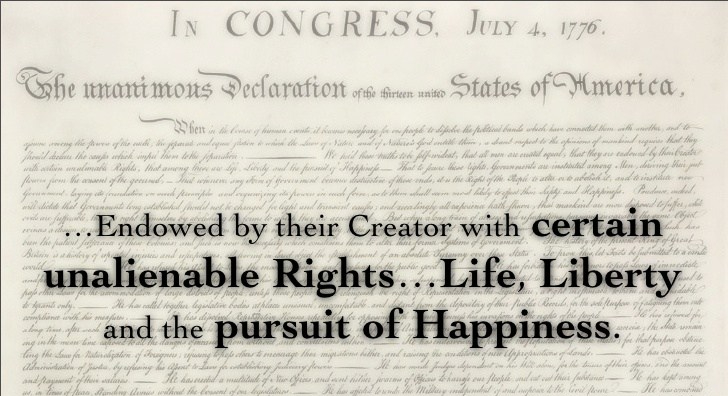 Inevitably… predictably… another mass shooting has inflamed the gun “rights” debate.  Again, politicians and pundits are debating the “rights” of gun-owners, guaranteed by the U.S. constitution, versus the “rights” of the innocent victims of gun-violence.

That being said, I respect that our laws allow others, who do have the need or desire, to do so.  And, law is the issue.

Humans create laws.  We decide what is legal, or illegal.  We decide, by creating (or amending) laws, who can sell, own, carry, or use a gun, and under what circumstances it is legal to do so.

Some argue that gun ownership is a “right,” guaranteed by our Constitution.  And, legally, they are correct.  But, for a moment, I would like to reflect on the word “rights.”  What are my rights, and what are my rights based on?

The Declaration of Independence says, “We hold these truths to be self-evident, that all men are created equal, that they are endowed by their Creator with certain unalienable Rights, that among these are Life, Liberty and the pursuit of Happiness.”  Inspiring words, penned by Thomas Jefferson.

“Unalienable rights” is a political/philosophical concept attributed to the “Creator.”  But, on what basis is such a claim made?

We have a “Bill of ‘Rights’,” that guarantees certain freedoms, and limits the powers of the government in specific ways, including the “right” for U.S. citizens to legally “keep and bear” arms.  The original “Bill of Rights” was written by James Madison, and approved by the United States Congress in 1789.  Numerous additions and amendments have been made to it over 200+ years.

The Congress – men and women elected by the people of the United States – have determined our rights for us, on our behalf.  Courts of law have defended those rights.  Hypothetically, those same laws can be amended by the same process.

What does God say about our “rights?”  To answer that particular question, Christians turn to Scripture as the primary authority for what God says, or doesn’t say.

You might be surprised to discover that the Bible has VERY little to say about “rights.”  Having “rights” is not a biblical concept.  Certain “rights” in marriage and inheritance are mentioned, which are mostly archaic.  The Prophets spoke of the “rights” of the poor, the widow, and the orphan to mercy and justice.  The Apostle Paul talks about having the “right” to food and drink, to being paid for his work, to having a wife – and yet, he didn’t demand his “rights,” for the sake of those he was called to serve.

Throughout the Bible, the word “right” appears primarily in two ways.  Repeatedly, the Bible talks about “doing” what is “right,” according to godly principles.  And, more importantly, the Bible talks about being “righteous” as God is “righteous.”  A “right,” biblically speaking, has nothing, whatsoever to do with what I am allowed or entitled to.  “Right,” biblically, is about correct, godly action.  Doing “right,” or being “right,” has to do with loving God and neighbor in thought, word, and deed.  “Righteous” living is godly living, which calls for obedience, faithfulness, and self-sacrifice for the sake of others.

That bears repeating.  Being “right” biblically means sacrificing my “rights” for the good and well-being of others.  “Demanding my rights and freedoms,” is inherently un-biblical, when it places my rights above another’s needs.

Let me be very clear.  “Liberty,” as in a Constitutionally-guaranteed freedom or right, is a political concept, not a biblical one.  The laws of the United States of America guarantee her citizens certain legal “rights.”  The Bible doesn’t.  That doesn’t make “rights” wrong or bad – they’re just not biblical.

Ultimately, whether or not laws are changed regarding gun ownership will be determined through a legal process of bills, debates, and votes – which may, or may not happen.  My point is this: Christians are called to “righteousness” – to do what is right, for the sake of others – not to defend our own “rights.”  My “right” as a U.S. citizen to “bear keep and bear arms” does not take precedent over God’s expectation of righteousness.  As a Christian, when demanding my legal “rights” supersedes my call to righteous living for the sake of others, I am not “right” with God.

Ultimately, my point – my opinion – really isn’t about the rightness or wrongness of gun ownership.  A “righteous” Christian can own a gun, and still be righteous!   I am NOT against responsible gun “rights” or laws, even if I don’t choose to exercise that “right.”  My point, Christian brothers and sisters, is that we must seek a “righteous” solution to gun-violence, based in biblically principles, not just legal ones.

We must offer a “righteous” perspective and voice into this legal debate.

Do we care more about our “rights” or our “righteousness?”

One thought on ““Rights” vs. “Righteousness””