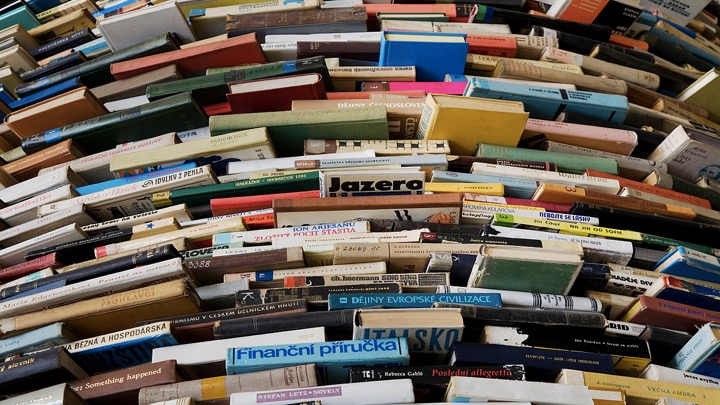 Revelation 20 says that there are books in heaven that contain the records of everything that every human has ever said or done.  Imagine that.  A book that contains every sin you have ever committed.  Every evil thought.  Every unkind word.  Every selfishness.  Every disobedience.  Every unfaithfulness.  Every missed opportunity to serve and share in Jesus name.  Every prideful moment.  Every sin in our lives, recorded in detail.

How many books would it take it to record the sinfulness of a single life?  Your life?  My life?

How many books would it take to record the misdeeds of every human who has ever lived?

How many volumes would be required to record the endless list of human atrocities throughout the centuries?

Scriptures say that Jesus was crucified on top of a skull-shaped hill called Golgotha.  Imagine Golgotha as a giant mountain, but instead of stones, it is was an enormous pile of the books recording the sins of the world – books stacked upon books stacked upon books – with a cross on the top, and crucified savior hanging there, dying for the sins of the world, recorded at his feet.

Imagine your book, containing the record of your sin, laying at the foot of the cross.

Colossians 2:13-14 says, “You were dead because of your sins and because your sinful nature was not yet cut away. Then God made you alive with Christ, for he forgave all our sins. He canceled the record of the charges against us and took it away by nailing it to the cross.”

Of course, no one was thinking any of that the day Jesus died.  All they could see was a man dying…

Many believed that Jesus was that man.  Some – the disciples, and others – had left home, and career, and family to follow him.  They trusted him.  They had put all of their hope in him.  They believed God was going to do something big through him.  God was, of course.  They just didn’t know what it was.  The scope of their hopes in this Jesus were just too small.

When Jesus rode into Jerusalem on Palm Sunday, all of their hopes and dreams seemed to be confirmed.  Jesus publically announced that he was the Messiah, the King of the Jews.  The crowds welcomed him as their new king.  Everything was coming together, just as they had hoped and believed it would.

What would they do now?

If the Messiah could be defeated, now what?

Or, if Jesus wasn’t the Messiah, who was he?

Jesus, of course had always been clear that his life would come to a violent, sacrificial end.  But, the disciples never seemed to understand…

As Jesus began his ministry, his cousin John pointed to him saying, “Behold the Lamb of God, who takes away the sins of the world.”  Lambs, we know, are sacrificed.

From the beginning Jesus defined discipleship, saying, “Whoever wants to be my disciple must deny themselves and take up their cross and follow me.”  No one understood crosses symbolically, or metaphorically.  Everyone had seen crosses lining the highways, with corpses of condemned criminals hanging from them.  Why didn’t they understand that Jesus was speaking literally?

Almost as soon as the disciples figured out that Jesus was the Messiah, he told them, “he must go to Jerusalem and suffer many things at the hands of the elders, the chief priests and the teachers of the law, and that he must be killed and on the third day be raised to life.”

The disciples never seemed to grasp any of it.  When Jesus died, it seems like it was the last thing they could have possibly expected.  They had no idea that he was accomplishing something far greater than anything they could image, hope, or dream.  This was bigger than a single moment in history, or a single nation.  Jesus was carrying upon his shoulders the weight of the sin and brokenness of the entire history of the world – every single act of hatred, selfishness, apathy, pride, prejudice, violence, greed, etc. – since Adam and Eve, to this very moment.

All they could see, on that first Good Friday was a defeated man – and the end of their hopes.

Makoto Fujimura writes, “If we care to know how deep the suffering of Christ goes – and how vast and even violent is the restoration process through Christ’s suffering – then we had better start with knowing the dark, cruel reality of the fallen world.  If we care to embrace hope despite what encompasses us, the impossibility of life and the inevitability of death, then we must embrace a vision that will endure beyond our failures…  The stench of death all around us will remind us that it is despite ourselves that grace and restoration can take place.”

There, at the base of the cross, imagine mounds of swords and spears no one has ever bothered to beat into plowshares; tanker trucks filled with toxic waste; stockpiles of banned chemical weapons; the cargo of druglords; the Mother of All Bombs; crates of last year’s fashions, that are “so last year”; truckloads of porn; tonnage of the chains and shackles of the enslaved; stacks and stacks of false testimonies; piles of cash wasted on frivolities that could have been used to help the poor.  Picture the mount of Golgotha surrounded by billboards displaying for the world your deepest and darkest secrets and fantasies.

Makoto Fujimura writes, “Our own acts of terrorism toward God drove Jesus to the cross.  Jesus’ slain body absorbed our anger and defiance, but more important, it absorbed God’s just anger toward us.  In that moment, all that was fair and beautiful in Christ became the hideous stench of a dying beast.  Beauty was literally pulverized, destroyed, and the Eternal experienced the decay of death.”

As horrific as the scene must have been for those watching it, it was far worse than anyone could have imagined.  Jesus wasn’t only dying an unfair, excruciating form of death.  He was bearing horrors too great to imagine.  And…  And…  In his very own flesh a work of restoration for the very worst of humanity – including yours and mine – had begun.

2 Corinthians 5:21 says, “God made him who had no sin to be sin for us, so that in him we might become the righteousness of God.”

Romans 5:17-19 says, “For the sin of this one man, Adam, caused death to rule over many. But even greater is God’s wonderful grace and his gift of righteousness, for all who receive it will live in triumph over sin and death through this one man, Jesus Christ. Yes, Adam’s one sin brings condemnation for everyone, but Christ’s one act of righteousness brings a right relationship with God and new life for everyone.  Because one person disobeyed God, many became sinners. But because one other person obeyed God, many will be made righteous.”

Calvary was not just a place of crucifixion – it was the birth place of your transformation and mine.  Calvary is the fertile soil where God planted a seed of transformation.  Jesus said, “Very truly I tell you, unless a kernel of wheat falls to the ground and dies, it remains only a single seed. But if it dies, it produces many seeds.”  (John 12:24)

Yes, there is a record of your sin.  It laid there among the rubble of Calvary, keeping Jesus’ cross firmly in place.  But, it has been completely covered in the precious blood of Christ, as it flowed down from his cross, fertilizing the ground of the new creation.  Whatever you have done, and whatever has been done you; whatever you have broken, and whatever has been broken in you; whatever disasters you have caused, or have endured; all of your shortcomings; all of your selfishness; all of your sin; all of it; all of it was there on Calvary; and, all of it, every word, every sentence, every paragraph, every page, every chapter, and every book has been completely covered in the sacrificial blood of Jesus.

No matter how good, how special, how holy you think you are, before Jesus died on the cross, all of us would have been devastated to see the record of our sins.  But, now, when the books are opened, the record of your sin, and mine, has been completely erased – washed whiter than snow.  All that once was recorded in our books, has planted in the soil of Calvary, waiting to blossom into something new.