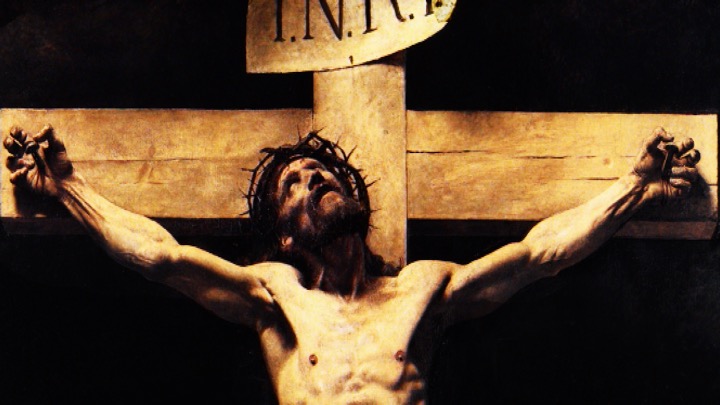 Undeniably, the ordeal Jesus endured was horrific.  Starting with an arrest; then a long night without sleep – full of hate, ugliness, condemnation and abuse; dragged from the Temple to Pilate, to Herod, and then back to Pilate; abuse and mockery at the hands of cruel Roman soldiers; rejection from the crowds who shouted, “crucify him!”; a severe beating, that likely nearly killed him; a crown of thorns shoved down on his head; and then a long walk to Golgotha, carrying his own cross on shoulders that had already been flayed open by the soldier’s whip.  All of that before he was even nailed to the cross.

When they got to Golgotha, long nails were driven through Jesus’ hands and feet, affixing him to the cross, and then his cross was raised to vertical, leaving Jesus dangling from just three nails, driven through his flesh.  For six, long, excruciating hours, he would suffer unspeakable agony, as life was slowly drained from his body.  Few deaths are as gruesome or humiliating as crucifixion.

And, while he hung upon his cross, his disciples had abandoned him and the leaders of his own religion mocked him.

As we have heard, we know he thirst.

As darkness covered the land, we know that he may have wondered if even God had abandoned him.

But, as Jesus’ final moments came, Jesus appeared to have been at peace and in control.

Fred Craddock writes, “There is nothing here of anger or doubt or thrashing about in the throes of death.  Rather, Luke writes of serenity, acceptance, and trust.”

John Stott writes, “It is not men who finished their brutal deed; it is he who has accomplished what he came into the world to do.  He has procured salvation for us, and made available the chief covenant blessing, the forgiveness of sins.  At once the curtain of the temple, which for centuries had symbolized the alienation of sinners from God, was torn in two from top to bottom, in order to demonstrate that the sin-barrier had been thrown down by god, and the way into his presence was open.”

As Jesus died, it is abundantly clear that he was in control.  While he was clearly the casualty of terrible human cruelty, Jesus was no victim.  He was on the cross because he had chosen to give his life for us, sacrificially.  He was satisfied that he had accomplished what he came to do.

It would seem that Jesus had always known that his life would end this way.

As Jesus began his ministry, his cousin, John the Baptist, pointed to him saying, “Behold the Lamb of God, who takes away the sins of the world.”

From the beginning, Jesus defined discipleship, saying, “Whoever wants to be my disciple must deny themselves and take up their cross and follow me.”  No one understood crosses symbolically, or metaphorically.  Everyone had seen crosses lining the highways, with the corpses of condemned criminals hanging from them.

Almost as soon as the disciples figured out that Jesus was the Messiah, he told them, “he must go to Jerusalem and suffer many things at the hands of the elders, the chief priests and the teachers of the law, and that he must be killed and on the third day be raised to life.”

Even as he prayed the night before his death, in the Garden of Gethsemane -throwing himself to the ground, sweating drops of blood in distress, and pleading for God to “let this cup pass” – we see Jesus calmly leaving the Garden and handing himself over to the Temple guards, trusting that in God’s will to be done.

Again, John Stott writes, “No-one took his life from him, he insisted; he was going to lay it down of his own accord.”

“Father, into your hands I commit my spirit.”

The Message version says, “Father, I place my life in your hands!”

Isn’t that what we are called to do?  To place the totality of our lives in the hands of God, just as Jesus did?

Scripture says that Jesus said these words “into your hands I commit my spirit,” in a “loud voice.”  They weren’t an embarrassed whisper, or a pathetic whimper.  They weren’t mumbled in weakness.  In his strongest voice, Jesus loudly projected, “Father, into your hands I commit my spirit”; words spoken in strength and confidence in the one who was about to receive his Spirit.  Even has his physical strength came to its end, his strength of faith in God was unwavering. As he was betrayed, abused, abandoned and killed by everyone else, he knew, HE KNEW he could trust his spirit, in that vulnerable moment, in the faithful hands of his heavenly father.  He surrendered his spirit to God, and he breathed his last.

Over and over in the Old Testament, the phrase, “into your hands,” refers to when God put the destiny of foreign rulers and armies – enemies – into the hands of Israel’s leaders.  In other words, God gave them control over their enemy’s destinies and their lives.  But, in this case, placing his spirit in God’s hands was nothing to fear.

It would seem that as Jesus knew death was near, Psalm 31 came to mind…

In you, Lord, I have taken refuge;
let me never be put to shame;
deliver me in your righteousness.
2 Turn your ear to me,
come quickly to my rescue;
be my rock of refuge,
a strong fortress to save me.
3 Since you are my rock and my fortress,
for the sake of your name lead and guide me.
4 Keep me free from the trap that is set for me,
for you are my refuge.
5 Into your hands I commit my spirit;
deliver me, Lord, my faithful God.

Jesus spoke those words, and then breathed his last breath.

There’s something profound in this statement.  “He breathed his last.”  The word for breath, in Greek, is the same word for “spirit.”  The word is “pneuma.”  Its Hebrew counterpart is “ruach.”  When God created the first human, from the dust of the ground, God breathed his breath, his ruach, his spirit, into the human to give it life.  The life within every human being, including Jesus, is the life-giving Spirit of God.

Let’s take that even further.  Jesus was conceived in Mary’s womb, by the same Holy Spirit.  At Jesus baptism, he was filled with the Holy Spirit.  Early in his ministry, at his hometown synagogue in Nazareth, he proclaimed, “The Spirit of the Lord is upon me…”

Though we all have the gift of the spirit in us, Jesus uniquely knew what it means to be alive in the spirit.  For thirty-three years, he lived in the power of the Holy Spirit, and in complete trust in his heavenly Father.  And, now, now that his work was done, as his human life was ebbing, he knew that he could safely return his spirit to his Father.

And he breathed his last.

It occurred to me, this week, that most images of Jesus on the cross, show him with his head lowered, and eyes closed.  In other words, most crucifixes portray a dead Jesus.  But, for the vast majority of the time that Jesus hung on the cross, he was alive.  I’m sure he was in agony.  I’m sure he was too weak to hold his head up.  I’m sure his eye-lids drooped after that long sleepless night, and as weakness overcame him.

But, Jesus faced his destiny with eyes wide open.

And, in his final moments, Jesus embraced his death, with eyes wide open.

Moments, later, he would open his eyes again, and behold the face of his Father.

Jesus called out with a loud voice, “Father, into your hands I commit my spirit.”   When he had said this, he breathed his last.