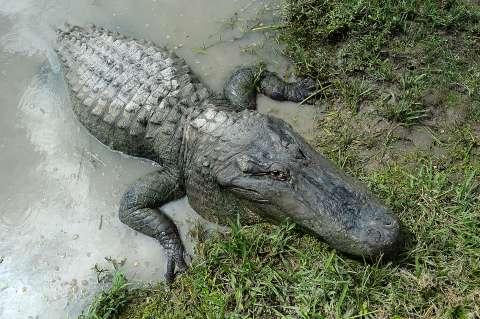 My childhood home is on Lake Highland, in Orlando, FL.  As early as I can recall, I grew up swimming in the lake – along with the ducks, algae, lily pads, bass, alligator gar, turtles, amoebas, and gators.  In warmer seasons, I must have been in, on, or by the lake every day, as I swam, skied, sailed, canoed, fished, etc., etc.

Lake Highland is not a large lake.  When we skied, or sailed, we just went around and round in circles.

But, as I recall, especially during the hot summer months, the water in the middle of the lake, where the water’s deepest, was significantly cooler and clearer than along the shoreline.  Along the shore, the water was hotter – like a bathtub.  The warm, shallow shoreline produced algae, grasses, cattails, and lily pads.  After summer rains, trash deposited along the shore, washed in from the surrounding roads.  Occasionally, a dead fish carcass floated to the shore.  And, of course, gators hung out at the shore!

Swimming in the deeper, middle waters was highly preferable – and safer!

The deep, middle waters.  That’s a metaphor for my religious life, and, specifically, my denominational affiliation.

I’m a United Methodist Pastor.  One thing I’ve appreciated about being a United Methodist has been that we’re considered a “middle way” expression of Christianity.  Within United Methodism, there’s room for high liturgy AND revival.  We have traditional AND contemporary worship services in most churches.  We have a high view of sacraments AND a commitment to the “born again” experience.  We save souls AND feed the hungry.  Our membership rolls include people as different as George W. Bush AND Hillary Clinton.

One of my favorite experiences in seminary was the theological debates, where I was surrounded by future United Methodist pastors, some FAR more liberal-minded than me, and others FAR more conservative.  Both sides stretched my thinking, understanding, and deepened my personal convictions.

I resonate deeply with uniquely United Methodist phrases like “the radical middle” or “the deep center.”

I’m a centrist.  I believe in the authority of Scripture, the Creeds, and am orthodox in most of my theological convictions.  I read classic and contemporary Christian authors, from a variety of Christian traditions. I love contemporary and traditional/liturgical expressions of worship.  I lean progressive on a number social issues, including the full inclusion of LGBTQ+ persons in the life of my denomination.  I believe in personal holiness and social justice.

As a centrist, I realize there will always be people who disagree with me, on a variety of beliefs, styles and positions.  I have friends, colleagues, and parishioners who are far more progressive, and others who are far more traditional/conservative – I’m thankful for each of them!  I’ve lived in this dynamic tension for the last thirty years, and valued it.  Though it isn’t always easy, the deep center has been a reliable place for constructive dialogue and spiritual growth.

But, in recent months, the UMC has become an increasingly inhospitable place for centrists.  Maybe, the UMC become inhospitable for everyone.

In February, traditionalists took control of a special, called “General Conference,” where, instead of finding a “Way Forward” for ALL United Methodists regarding LGBTQ+ inclusion, they actually made it more difficult for LGBTQ+ persons, and their allies, to feel welcome or wanted, moving us collectively to the “right.”  Since then, progressive and centrist United Methodists have shifted further “left,” countering the recent conservative sway.

Sides have been taken.  Bold lines drawn, with centrists/progressives on one side, and traditionalists on the other.  There are winners and losers.  There’s finger pointing and name calling.  Feelings are hurt.  Gloating abounds.  Nerves frayed.  Patience worn thin.  Trust dissipated.  Threats made.  Relationships strained.  Advocacy for some, perceived as attack by others.

In some places in our denomination, traditionalists have gained ground.  In other places, like my own Florida Annual Conference, progressives have prevailed… for now.

Frankly, it all feels pretty “swampy. ” While my metaphor isn’t perfect, and may just add to the mountain of offense already out there, it feels like the deep center of my spiritual lake has turned into a shallow, tepid, gator-filled swamp.  Having worked at Florida State University for eleven years, you should know how I feel about gators and swamps!!!

I don’t mean to imply that progressives and conservatives are shallow, dirty, or swampy – but, if the metaphor fits…  I’m mostly taking about the loss of the deep center.

Here’s my concern.  If the United Methodist Church divides, which seems increasingly likely – and, possibly necessary –  what happens to the deep center?  Though I consider myself to be on the “left” side of the middle, do I automatically become “right” of center, if the traditionalists leave?  Will I be progressive enough?  Will I be TOO orthodox in my biblical and theological convictions?

Returning to my lake analogy, when you walk through the thick algae growing along the shores of Florida lakes, stinky, swampy gasses are released.  Wading into the tepid shallow waters, your feet sink into muck, slimy algae clings to your legs, and gassy stench bubbles up, filling your nostrils.  It isn’t pleasant.  Growing up, I learned to skip the shallow shoreline, by canoeing to the center of the lake for my swims, where the water was deepest, clearest, and most refreshing.

I like swimming in the deep, clear, refreshing waters – literally and metaphorically.

Again, I don’t mean to imply that my strongly conservative or progressive colleagues are shallow, muddy, or stinky.  I’m just missing the middle.  I think we need the middle.  I worry about who we are, or will become, if the middle is gone.

9 thoughts on “The Deep Center”