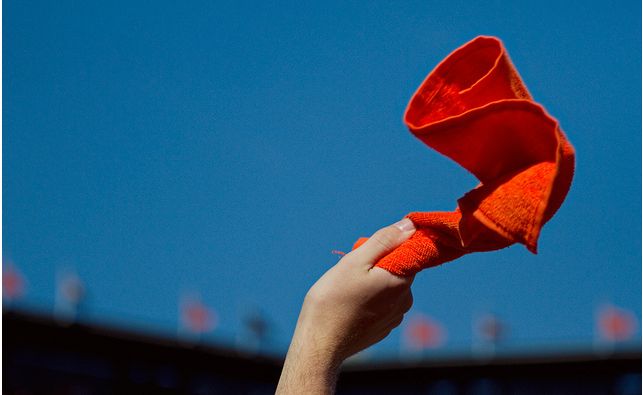 I’ve been reading through the Old Testament book of 1 Samuel recently.  1 Samuel tells the story of the rise and fall of King Saul, and the rise of David to take his place.

By Chapter 24, it was obvious to King Saul that David was a threat to his reign, and he plotted of have David killed.

King Saul heard that David and his supporters were hiding in the desert of En Gedi.  King Saul led an army of thousands to find him and kill him.  By coincidence, Saul happened to enter a cave to “relieve himself,” where David was hiding with his men.  Unaware that he wasn’t alone, David snuck up on King Saul – while he was otherwise occupied – and cut off a corner of his robe, then quietly snuck away, doing King Saul no real harm.

David could have killed King Saul, while we was vulnerable and unaware.  His men thought he should.  It would almost seem that God had delivered King Saul right into David’s hands.

But, David didn’t see it that way.  While King Saul had clearly lost God’s favor, and David was clearly destined to take his place, David would not be the one to harm or kill the King.  In fact, David felt guilty for even cutting King Saul’s robe.  As long as King David held the throne, at least in David’s eyes, King Saul was still God’s anointed.

“My lord the king!” When Saul looked behind him, David bowed down and prostrated himself with his face to the ground.  He said to Saul, “Why do you listen when men say, ‘David is bent on harming you’?  This day you have seen with your own eyes how the Lord delivered you into my hands in the cave. Some urged me to kill you, but I spared you; I said, ‘I will not lay my hand on my lord, because he is the Lord’s anointed.’  See, my father, look at this piece of your robe in my hand! I cut off the corner of your robe but did not kill you. See that there is nothing in my hand to indicate that I am guilty of wrongdoing or rebellion. I have not wronged you, but you are hunting me down to take my life.   May the Lord judge between you and me. And may the Lord avenge the wrongs you have done to me, but my hand will not touch you.   As the old saying goes, ‘From evildoers come evil deeds,’ so my hand will not touch you.

To David, harming – or even disrespecting – King Saul would be a violation of his conscience.  We call that character – doing the right thing, all the time, even when there is personal cost or risk.

You don’t have to be a Christ-follower to be a person of character.  There are certainly people of every religion – and none – who have admirable integrity and conduct.  But, to be a Christ follower demands that we strive to have the character of Jesus Christ.  Jesus said, “Whoever can be trusted with very little can also be trusted with much, and whoever is dishonest with very little will also be dishonest with much” (Luke 16:10).

Isn’t that, at least in part, what Lent is all about?  Is our character consistently a reflection of Jesus Christ?  Or, have we compromised in the small things?

Certainly, killing King Saul would have been a big deal.  But, David regretted even cutting the king’s robe.  In David’s mind and heart, there was no justifying a compromised character, even when others might think him justified in doing something as small as cutting the kings robe, or even as extreme as killing.

Do I care about the small details in my character and conduct?  Do you?